What do train tracks, philharmonic orchestras, and giant chess sets have in common?  They are all features found in new, groundbreaking libraries from across the world.

The Straits Times, a periodical from Singapore, recently released an article on wonderful and creative new library designs.  It includes examples from cities as diverse as Helsinki, Calgary, Doha, and Austin.  All of these new buildings challenge the traditional ideas of what makes a library a library.

“Helsinki Central Library in Finland: Only one-third of the 185,000 sq ft space is allocated to books – the rest is community space for meetings and activities. An urban workshop on the second floor, for example, has sewing machines, scanners and printers as well as laser cutters and soldering stations, with spaces allocated to sewing, making badges and even playing the drums.

Calgary New Central Library in Canada: It has train tracks running through it, as the site was designed to accommodate an active Light Rail Transit Line that already existed. The lobby is an arched bridge that lets locomotives go under it and in “living rooms”, patrons can sit on swirly chairs and watch them zoom by all day.” 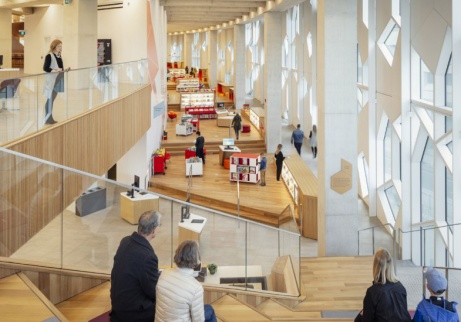 View the rest of the article and learn more about these innovate library designs on The Straits Times web site.